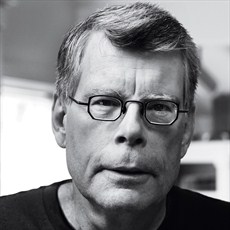 Of Scot-Irish ancestry, Stephen Edwin King was born in Portland, Maine in 1947. He attended the grammar school in Durham and then Lisbon Falls High School. From his sophomore year at the University of Maine at Orono, he wrote a weekly column for the school newspaper. He was also active in student politics, arriving at his stance that the war in Vietnam was unconstitutional. He graduated in 1970, with a B.A. in English and qualified to teach on the high school level.

He and Tabitha Spruce married in January of 1971. Stephen made his first professional short story sale (‘The Glass Floor’) to Startling Mystery Stories in 1967. Throughout the early years of his marriage, he continued to sell stories to men’s magazines. Many of these were later gathered into the Night Shift collection.

In the fall of 1971, Stephen began teaching high school English classes at Hampden Academy. Then, in the spring of 1973, his novel Carrie was accepted for publication. This was followed by ‘Salem’s Lot. The following year, the Kings left Maine for Boulder, Colorado, where Stephen wrote The Shining. Returning to a home in the Lakes Region of western Maine, Stephen finished The Stand and The Dead Zone.

In 1977, the Kings spent three months in England. He and his wife now spend winters in Florida, and the remainder of the year in their Bangor and Lovell homes in Maine. Stephen King has written more than fifty books, all of them worldwide bestsellers. His acclaimed novels and short story collections include Carrie, The Shining, The Stand, Misery and 11.22.63. He is also the author of The Dark Tower fantasy series and a wonderful non-fiction book: On Writing: A Memoir of the Craft.

Many of King’s books have been turned into celebrated films, including Stand by Me, The Green Mile and The Shawshank Redemption.

Stephen is the 2003 recipient of The National Book Foundation Medal for Distinguished Contribution to American Letters.

Adapted from the original biography written by Tabitha King and updated by Marsha DeFilippo.